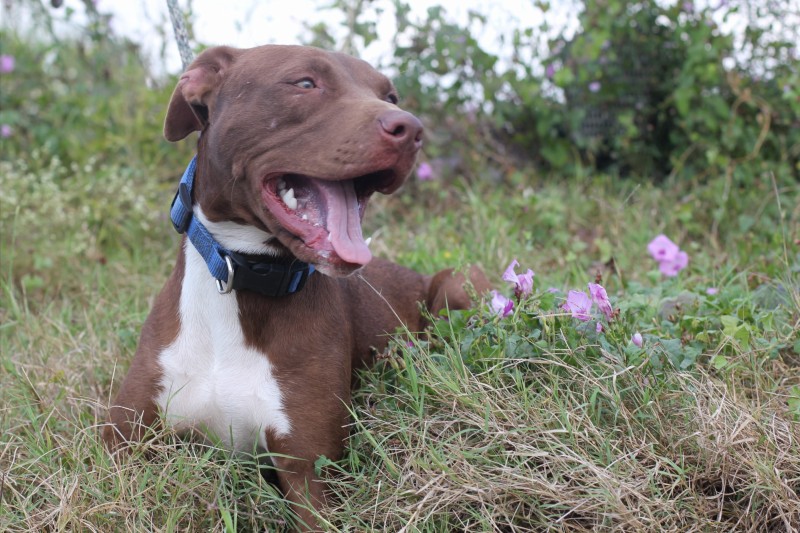 Puppies are one of the most innocent creatures on the planet.  Yet the cold hearted people who brought her to us were nothing short of…..well you get the picture.  A man and woman pulled up to our facility here in New Orleans claiming they had “found a puppy”.  As they were telling the “story”, I looked into the cab of their truck to see what/who they were talking about.  I saw nothing so I asked “where is the puppy?”  The woman gave me this look of disgust and said, “ah Hell no.  I can’t stand dogs” and she pointed into the back of their pick up truck.

There huddled under a tool box was a shaking and scared to death little 8 week old Pit Bull puppy.  It took everything I had not to go off on this woman.  To even think what could’ve happened, well I don’t want to think actually. Now that we are an actual public shelter, I now see what city and county animal shelters have to go thru on a daily basis and I have an all new respect for their workers.  This is so frustrating and heartbreaking at the same time.

Marie has been raised in our puppy foster home and has been crated trained, started some beginning basic training and spends her days playing with other dogs including a couple of 120 lbs. Mastiffs.  Her photo doesn’t do her justice as she is breath taking and a fine example of the breed. Currently her best bud is “Steve” one of the 20 puppies we rescued in the Lower 9th Ward when we first moved here. Though Marie could be adopted out on her own, it would be great if Steve could go with her. You can’t go wrong with this little redhead….well if you take both…..THAT’S A COUPLE OF REDHEADS!