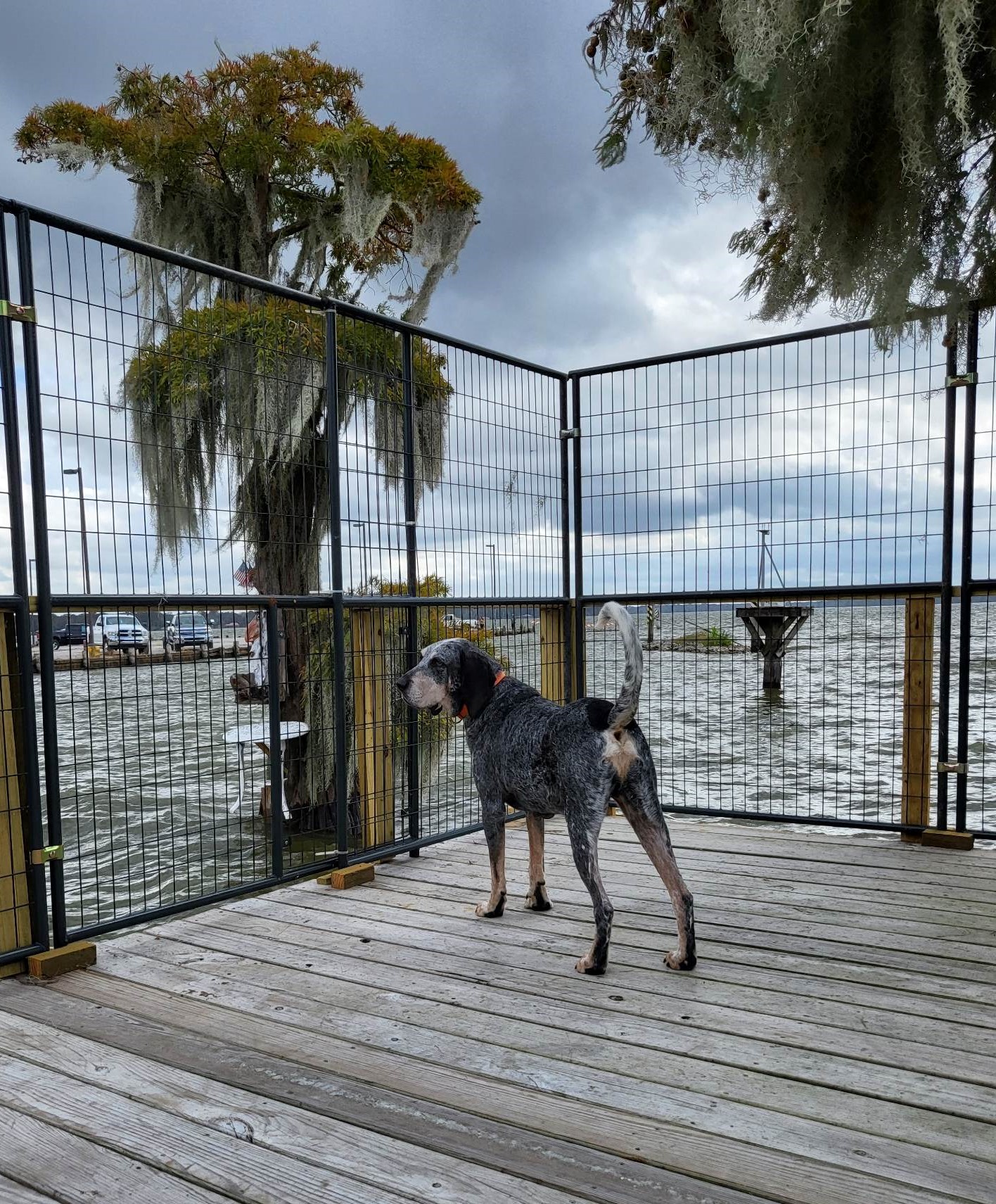 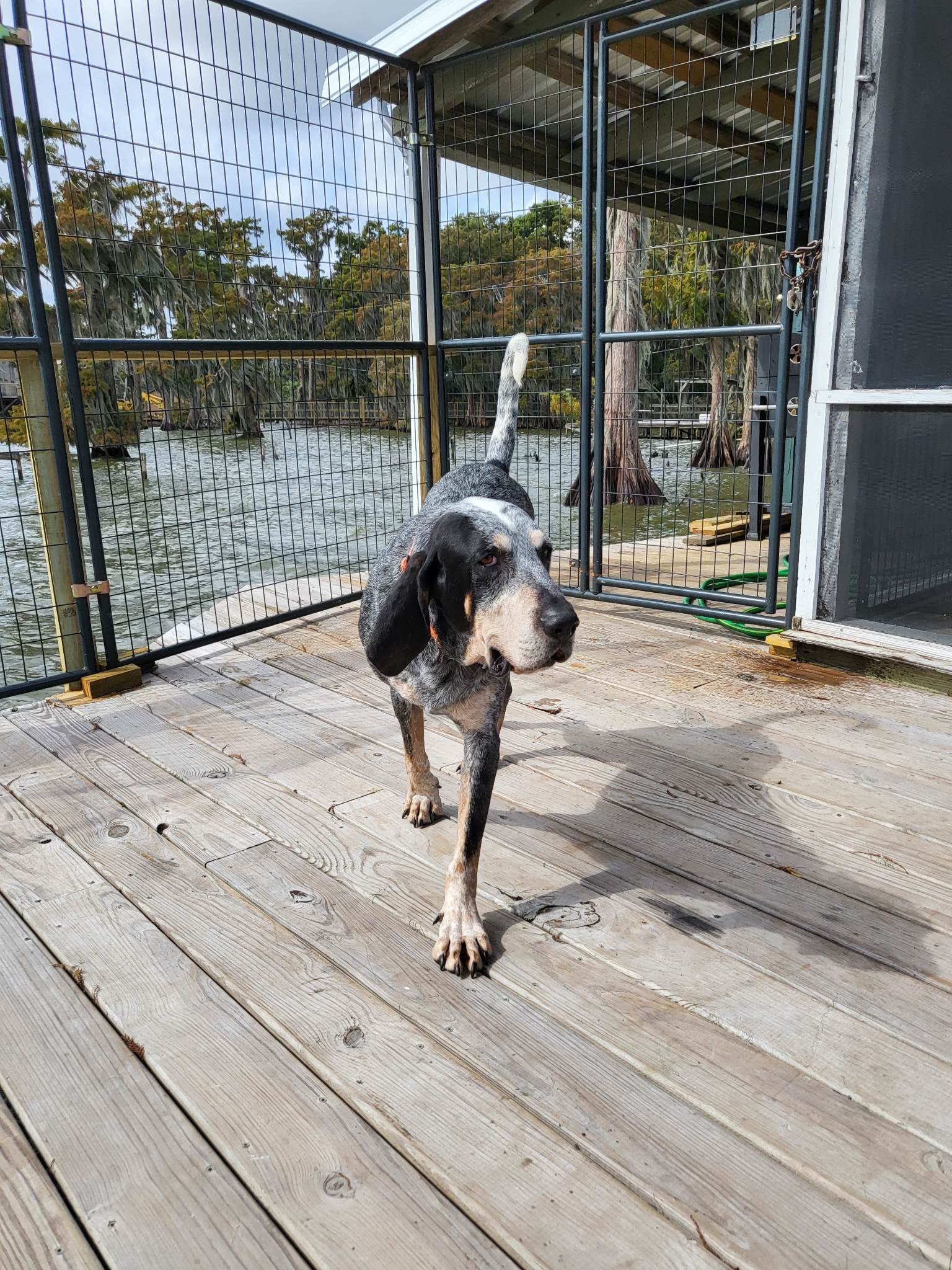 Baxter is a Bluetick Coonhound who came to us right after Hurricane Florence. The storm destroyed the Carolinas back in 2018.  He along with 3 of his brothers were found swimming through the aftermath of the flooded area in South Carolina and were rescued by a local animal shelter.  One of the brothers got adopted out right away, while the other three remained in the shelter.  Baxter, Biscuit, and Barney sat there until we were alerted to them. We then made the drive and brought the “Bluez Brothers” back to Louisiana.

Right away we could see that they were filled with anxiety and chalked it up to PTSD from the storm.  The trio got bounced around from one location to another within the VRC organization.  They had actually lived with me (Tia Torres) 3 different times trying to deal with their anxiety issues (add to this Barney has MAJOR separation anxiety)  And after years of being with us, and coming back full circle to live with me…again, Baxter has finally decided he’s ready!

Out of the three brothers, he’s always been the more stable one, Mr. Cool Hand Luke himself. So his behavioral issues were not as severe.  He was more untrusting of those he didn’t know and in a kennel environment would stress out.  But after all this time and now living IN my house and being a couch potato, he has become an amazing pooch.

Here is what Baxter will need as far as a home goes:

Baxter is dog-friendly most of the time.  He just doesn’t take kindly to a dog trying to punk him or push him around.  And if “backed into a corner” he will rock n’ roll.  So if there has to be another dog in the home, a gentle, laid-back female pooch would be best.

As for cats, that would be a no-go.  He’s still got the “hunter” in him when it comes to small critters.

When it comes to kids, older ones would be the best.  He’s just not into them.

Baxter’s personality is pretty chill. He is crate trained and is fine with going out for walks or sprawled out on your couch.  He is not a typical hound, meaning he doesn’t bounce off the walls..haha!  He doesn’t play with toys but he LOVES his food!  Morning eating time is his favorite.

Baxter is an INDOOR dog.  He is not some outdoor, chained up, left out in a pen/kennel kind of dog.  Some people seem to think that all hounds belong outside. It’s simply not true.  He enjoys both the comfort of sprawling out on your livingroom floor or laying in the sun in the yard.

Truth be told, Baxter is “my boy”  He’s just an amazing dog that is finally ready for a home to call his own.  And yes, he is doing great at my house but I want what’s best for him and that’s to have his own people, go on car rides, hiking, hanging out, watching TV, scent rubbing on you (he LOVES to rub on his human like a cat does).  Whoever gets this guy is going to make me cry happy tears.  And sometimes a good cry is a good thing.